Earlier today the 33rd Chicago Marathon was held. I will organise my comments by pointing out three epic fails.

First, of course, was the Chicago weather. After two successive marathon in excessive heat --- the 2007 race I completed, poorly, with its thousands of runners forced to abandon when the race was cancelled due to excessive heat, and the 2008 version which I skipped as I ran Berlin that year just weeks before Chicago, this year had forecasts of temperatures in the thirties and possibly snow the night before. Well, the weather cleared up -- but with those clear skies we still got a severe weather alert for the area due to frost! So at the (now earlier by 30 minutes) race start, it was very nippy and in the higher 30s, improving steadily under sunny skies. Overall, a little chilly and hence not exactly ideal, but not too bad in the grand scheme of things. A little windy coming up Michigan Avenue. But hey, Wanjiru still finished with a course record though still well off the world record. So maybe not a fail after all.

The second fail, though, was my GPS which I had just blogged about yesterday (albeit indirectly). I had had my issues with the previous (much simpler and older) Forerunner 205 which lost satellite tracking when running downtown amidst the skyscrapers. I had high hopes that this newer model would do better. But no, not only did it loose track within the first few miles, it even managed to outdo the older model by turning its GPS tracking off in the later stages. Now that's a fail!

The third and final fail, unfortunately, concerns my run. Training had gone well enough to let me hope for another decent race. However, a latent cold during the last two weeks had left me somewhat afraid I might not do well. Things felt better yesterday, and I ended up running a decent first eighteen miles to the waterstop the rest of my household was working. And thereafter: well let's just say that the wheels came off. I ended up with a 3:25:40 (or around 7:51 min/mile and 4:53 min/km) which is not terrible but also not one of my better races.

I updated the two race data geekery charts shown here before to illustrate the fail. As I am running out of shades of blue for Chicago, I show the 2009 race in purple. A decent, flat chat indicating a reasonably steady pace throughout most of the race ... followed by one of the very worst finished. And as discussed above, I cannot really blame the weather either. 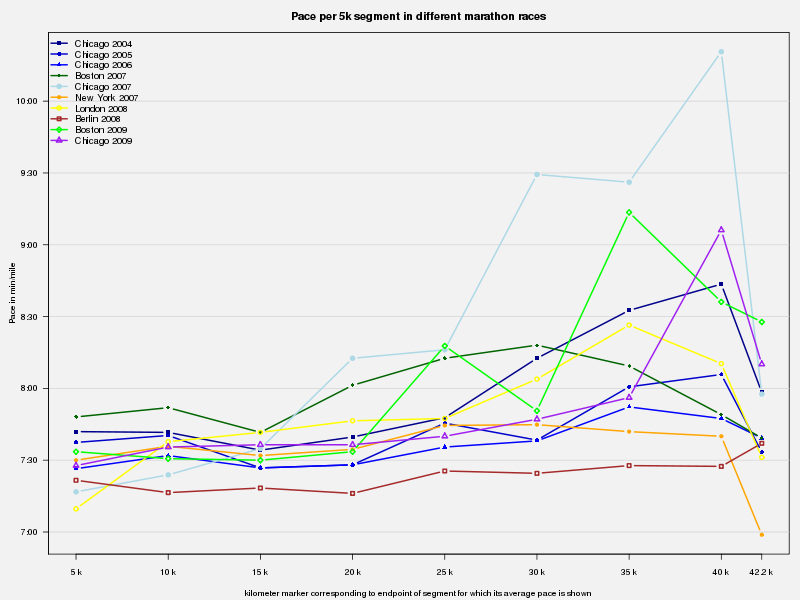 I also updated my 'performance by race type through time' chart which suggests that I may be getting slower for marathons (if we allow for a non-linear effect). Eek. 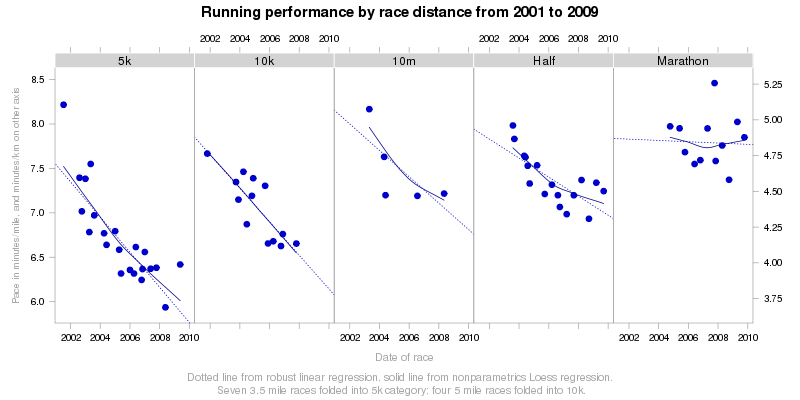