Memorial Day weekend so following the annual JPMorgan Chase CC run on Thursday, it was once again time for the annual Bike The Drive on Chicago's beautiful Lakeshore Drive. The weather was craptastic---following a fog (!!) warning we had dense fog along the lake making it somewhat moist and chilly. Once we were done this was followed by an impressive thunderstorm warnings and rather heavy rain. But the girls were troopers and we did both halfes for a total of thirty miles as shown on this Google Maps record of the ride.

Memorial Day weekend is also time for the annual Bike The Drive in Chicago. This time only half the household got up bright and early and enjoyed Lakeshore Drive free of cars. A highly recommended event.

Memorial Day weekend, so time for the annual Bike The Drive in Chicago. Got the whole family up bright and early, and was it ever nice -- 60-some degrees, sunny blue skies and no wind. Perfect conditions. And the Chicagoist blog has some pictures up.

On modes of transportation

Something I never really mentioned was the purchase of the foldable bike: a Dahon with a reasonably lightweight aluminum frame, a seven-speed hub and high-pressure tires. It's great fun in the city for the rides to and from the commuter train, or across downtown for occasional errrands after work.

I have had this foldable bike for nearly two years, and used it almost (work-)daily, even in the Chicago winters. 'Almost' because I did suffer from broken parts on a few occassions: a pedal broke (easy replacement), the axis in the front wheel broke (a good week for a new and inexpensive wheel) but the bummer was that a part of the frame-folding mechanism broke last fall. Given that the bike, which I bought used via craigslist, is a few years old, the part was no longer standard and so we waited for it to be shipped from the manufacturer. And waited and waited some more until Dan's decided to give me a matching part from a bike in their inventory. But apart from that episode, and the occassional problem with conductors on the Metra commuter trains, it has been a smooth ride. Highly recommended, and I do see a few more foldable bikes downtown. 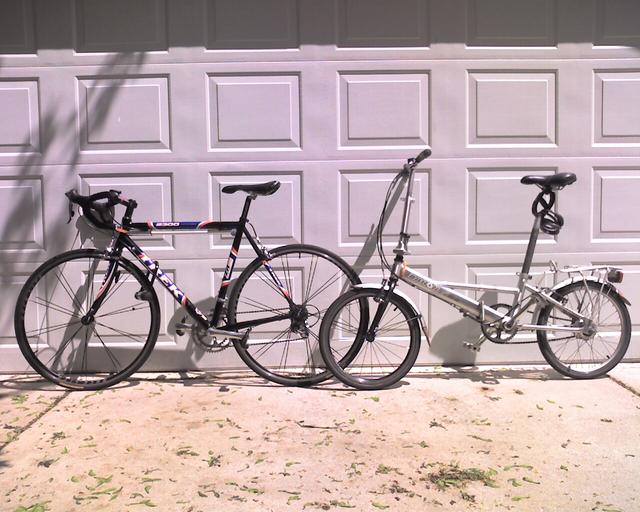 But what is new now is that I finally gave in and bought a road bike, once again off craigslist. My daily commute is about ten miles one-way, which works out to about 35 to 40 minutes of cycling, plus a few minutes of locking/un-locking, changing, etc. I had used my trusted (yet heavier) touring bike with its steel frame a number of times, but felt that a road bike may make for a faster ride. While it saves a few minutes, it is not really a time saver as the bike-train-bike commute also takes around 40 to 50 minutes. That said, riding is simply a nice way to clear the head before or after work. I am back on the schedule I tried for a few weeks last summer / fall: running on Tuesday and Thursday leaves Monday, Wednesday and Friday for the bike commute. So far, I am 8 for 9 over the last three weeks. On the downside: one rather wet ride home, and already to minor flats that (luckily) still allowed riding home. The hardest part is meeting up with some other riders at 6:00am meaning that I am now getting up at 5:00am whether I am running or not. But all told a nice way to get some exercise in outside of running.

Got the whole family out Sunday morning for the annual Bike The Drive in Chicago. The weather looked unfriendly, but behaved as rain stayed away under gray skies (before the day turned into a screamer of a sunny day, very fitting for a holiday). All in all a nice outing, the weather notwithstanding, and we ended the afternoon at a Chicago Fire soccer game.

Yesterday was the annual Bike The Drive in Chicago. The very scenic Lakeshore Drive, also known as LSD, gets blocked for four or five hours until 10:00am, and almost 20,000 cyclists take advantage of it for doing 15 to 30 miles from Grant Park down to Hyde Park, and up all the way to Bryn Mawr. Couldn't have asked for a nicer day as all of a sudden summer has broken out here with temperatures of over 90 degrees fahrenheit. It's really stunning to have the sunlight gleaming over the lake, to see the city skyline in bright sunlight, and to be surrounded by nothing but bikes. A nice outing, highly recommended. We then took the afternoon off and baked at the neighborhood pool.

Today was the annual Bike The Drive on Chicago's scenic Lakeshore Drive. And what a blast--six to eight lanes of traffic totally free of cars, and filled with thousands of cyclist doing 15 or 30 miles along the lakefront.

I even cycled in from home, which added another 2 x 12 miles or so for a total of around 54 miles. Got lucky and arrived home just before a massive thunderstorm hit

Today was the 15th annual Boulevard Lakefront Tour (BLT) across Chicago. A really, really beautiful tour. Quite pleasure. We got lucky and the promised rain didn't show up during the ride. Only before and after :).