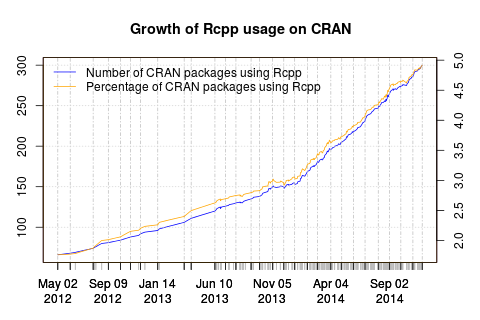 This morning, Rcpp reached another round milestone: 300 packages on CRAN now depend on it (as measured by Depends, Imports and LinkingTo declarations). The graph is on the left depicts the growth of Rcpp usage over time. There are 41 more on BioConductor (which is not included in the chart).

The first and less detailed part uses manually save entries, the second half of the data set was generated semi-automatically via a short script appending updates to a small file-based backend. A list of user package is kept on this page.

Also displayed in the graph is the relative proportion of CRAN packages using Rcpp. The four per-cent hurdle was cleared just before useR! 2014 where I showed a similar graph (as two distinct graphs) in my invited talk. We may well hit five per-cent before the end of the year.

300 is a pretty humbling and staggering number. Also interesting that we we cleared 200 only at the end of April, and 250 in early August.

So from everybody behind Rcpp, a heartfelt Thank You! to all the users and of course other contributors.