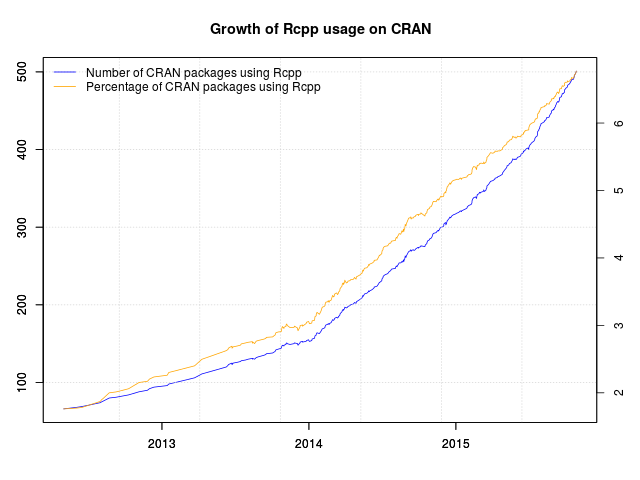 This morning, Rcpp reached another round milestone: 501 packages on CRAN now depend on it (as measured by Depends, Imports and LinkingTo declarations, and even excluding one or two packages with an accidental declaration that do not use it). The graph is on the left depicts the growth of Rcpp usage over time. And there are a full seventy more on BioConductor in its development branch (but BioConductor is not included in the chart).

Rcpp cleared 300 packages less than a year ago. It passed 400 packages in June when I only tweeted about it this June (while traveling for Rcpp training at U Zuerich, the R Summit at CBS, and the fabulous useR! 2015 at U Aalborg; so no blog post). The first and less detailed part uses manually saved entries, the second half of the data set was generated semi-automatically via a short script appending updates to a small file-based backend. A list of user package is kept on this page.

Also displayed in the graph is the relative proportion of CRAN packages using Rcpp. The four per-cent hurdle was cleared just before useR! 2014 where I showed a similar graph (as two distinct graphs) in my invited talk. We passed five percent in December of last year, six percent this July and now stand at 6.77 percent, or about one in fourteen R packages.

500 user packages is very humbling, a staggering number and a big responsibility. We will out best try to keep Rcpp as performant and reliable as it has been so that the next set of packages can rely on it---just like these 500 do.