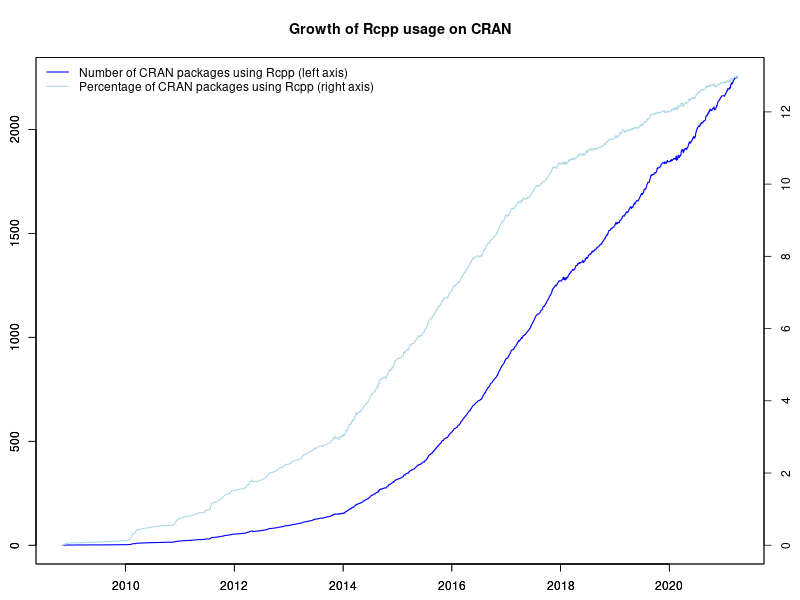 As of today, Rcpp stands at 2255 reverse-dependencies on CRAN. The graph on the left depicts the growth of Rcpp usage (as measured by Depends, Imports and LinkingTo, but excluding Suggests) over time. We actually crossed 2250 once a week ago, but “what CRAN giveth, CRAN also taketh” and counts can fluctuate. It had dropped back to 2248 a few days later.

Also displayed in the graph is the relative proportion of CRAN packages using Rcpp. The four per-cent hurdle was cleared just before useR! 2014 where I showed a similar graph (as two distinct graphs) in my invited keynote. We passed five percent in December of 2014, six percent July of 2015, seven percent just before Christmas 2015, eight percent in the summer of 2016, nine percent mid-December 2016, cracked ten percent in the summer of 2017 and eleven percent in 2018. Last year, along with passing 2000 package, we also passed 12.5 percent—so one more than in every eight CRAN packages depends on Rcpp. Stunning. There is more detail in the chart: how CRAN seems to be pushing back more and removing more aggressively (which my CRANberries tracks but not in as much detail as it could), how the growth of Rcpp seems to be slowing somewhat outright and even more so as a proportion of CRAN – as one would expect a growth curve to.

2250 user packages, and the continued growth, is truly mind-boggling. We can use the progression of CRAN itself compiled by Henrik in a series of posts and emails to the main development mailing list. Not that long ago CRAN itself did have only 1000 packages, then 5000, 10000, and here we are at over 17300 with Rcpp now at nearly 13.0% and still growing. Amazeballs.

The Rcpp team, recently grown in strength with the addition of Iñaki, continues to aim for keeping Rcpp as performant and reliable as it has been. A really big shoutout and Thank You! to all users and contributors of Rcpp for help, suggestions, bug reports, documentation or, of course, code.

If you like this or other open-source work I do, you can now sponsor me at GitHub.