A new version, now at 0.2.1, of the random-number generator tester RDieHarder (based on the DieHarder suite developed / maintained by Robert Brown with contributions by David Bauer and myself) is now on CRAN.

This version has only internal changes. Brian Ripley, tireless as always, is testing the impact of gcc 10 on CRAN code and found that the ‘to-be-default’ option -fno-common throws off a few (older) C code bases, this one (which is indeed old) included. So in a nutshell, we declared all global variables extern and defined them once and only once in new file globals.c. Needless to say, this affects the buildability options. In the past we used to rely on an external library libdieharder (which e.g. I had put together for Debian) but we now just build everything internally in the package.

Which builds on the changes in RDieHarder 0.2.0 which I apparently had not blogged about when it came out on December 21 last year. I had refactored the package to use either the until-then-required-but-now-optional external library, or the included library code. Doing so meant more builds on more systems including Windows.

This (very old) package has no NEWS.Rd file to take a summary from, but the ChangeLog file has all the details.

Per a CRAN email sent to 300+ maintainers, this package (just like many others) was asked to please register its S3 method. So we did, and also overhauled a few other packagaging standards which changed since the last upload in 2014.

No NEWS.Rd file to take a summary from, but the top of the ChangeLog has details.

Thanks to CRANberries, you can also look at a diff to the previous release.

A pure maintenance release of RDieHarder is now on CRAN. RDieHarder provides R bindings for the DieHarder battery of tests for random number generators by Brown et al. This release contains no new code, but the vignette needed to be moved from inst/doc to vignettes/ to help finalize that transition of the R / CRAN Package Policy. Courtesy of CRANberries, there is also a diffstat report relative to the previous release. As always, more detailed information is on the RDieHarder page.

RDieHarder is an R package providing access to the DieHarder battery of tests for random number generators developed by Robert G. Brown and others. DieHarder had been updated to version 3.1.1 a while back, and I had been a little behind with updating RDieHarder. Version 0.1.2 rectifies this.

The package still comes with a vignette describing both DieHarder and the RDieHarder package. And because pictures speak louder than a thousand (blogged) words, here is the first chart from the vignette: 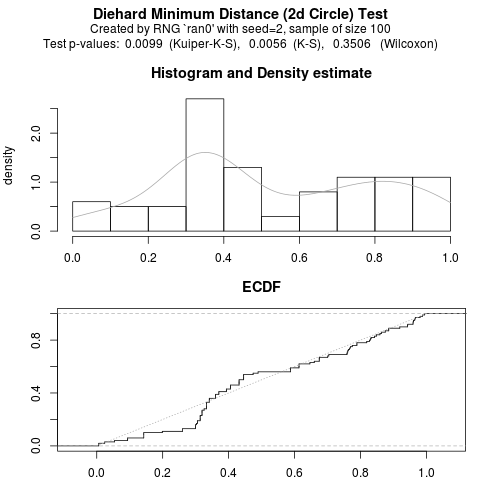 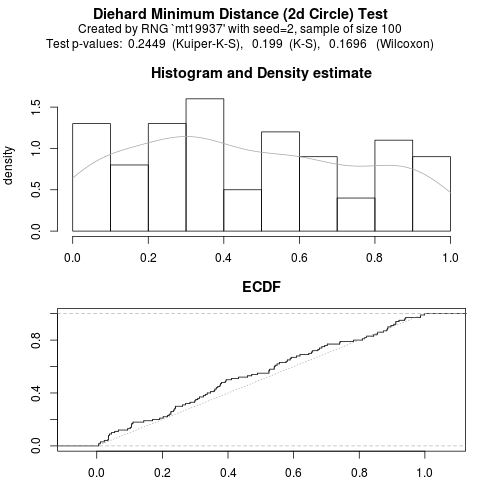 On the left, we have a poor random-number generator (RNG), the older ran0 function. The histogram illustrating the distribution of test scores is somewhat uneven. An ideal (and asymptotic) outcode is a uniform distribution of p-values from the test. The empirical cumulative distribution function (ECDF) below indicates a somewhat pronounced departure from the diagonal. Informally speaking, this is what the (Kuiper-)Kolmogorov-Smirnov test quantifies, and we see (in the text in the chart) that the null of can be rejected an conventional levels. Based on this example (which had a short run-time with few samples) we would indeed mistrust this (known bad) RNG.

On the right, we have a more recent and trusted RNG, the well-known Mersenne Twister. The ten histogram buckets are all closer to the expected value of one-tenth, the estimated density is closer to flat, the ECDF is closer to the diagonal and the tests don't reject---so no reason to mistrust this RNG based on this test alone.

RDieHarder lets you run a battery of such tests against a boatload of known RNGs. Here is a second example, comparing the six RNGs built into R itself: 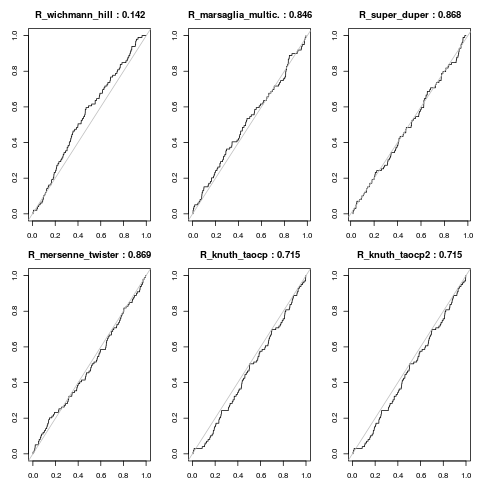 And these six look fine, as you'd expect. (And yes, the ECDF charts should each be on a square plot. Another time...)

Courtesy of CRANberries, there is also a diffstat report for 0.1.2 relative to the older 0.1.1 release. More detailed information is on the RDieHarder page.