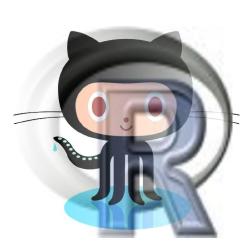 R relies on package repositories for initial installation of a package via install.packages(). A crucial second step is update.packages(): For all currently installed packages, a list of available updates is constructed or offered for either one-by-one or bulk updates. This keeps the local packages in sync with upstream, and provides for a very convenient way to obtain new features, bug fixes and other improvements. So by installing from a repository, we automatically have the ability to track the repository for updates.

Fairly recently, the drat package was added to the R ecosystem. It makes both aspects of package distribution easy: providing a package (if you are an author) as well as installing it (if you are a user). Now, because drat is at the same time source code (as it is also a package providing the functionality), and a repository (using what drat provides ib features), the "namespace" becomes a little cluttered.

But because a key feature of drat is the "one variable" unique identification via the GitHub, I opted to create a drat repository in the name of a new organisation: ghrr. This is a simple acronym for GitHub Hosted R Repository.

We can outline several use case for packages in ghrr:

ghrr is meant to be open. While anybody can open a drat repository, particularly on GitHub, it may be beneficial to somehow group packages. This is however not something that can be planned ex-ante: it may just happen if others who see similar benefits in this can in fact contribute. In that spirit, I strongly encourage pull requests.

Early on, I made my commit messages conform to a pattern of package version sha1 repourl to make code provenance of every commit very clear. Ideally, subsequent commits would conform to such a scheme, or replace it with a better one.

A few links to learn more about drat and ghrr:

Comments and questions via email or issue tickets are more than welcome. We hope that others find ghrr to be a useful tool for easy repository management and use via GitHub.