A new minor release of RQuantLib was released onto CRAN and into Debian. It takes advantages of some changes from last week's QuantLib release 1.7. 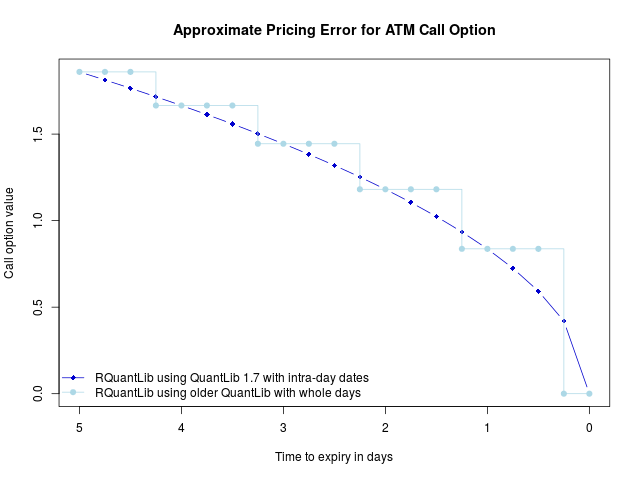 Particularly noteworthy is the addition of support for intra-daily times in QuantLib based on work by Klaus Spanderen. If QuantLib was configured with the -enable-intraday option, we use the higher granularity of the time representation in all option pricers and implied volatility calculations. The impact of this feature is illustrated in the graph below.

The graph shows the valuation of a Call option, European expiry, struck at the money with sensible short rate, dividend yield and volatility. We vary the time to expiry from five days to zero in steps of a quarter day. In darker blue is the correct valuation declining in parabolic shape. In lighter blue is what we get with QuantLib up to release 1.6, or newer releases configured without intra-day time support: an ugly step function that is off, and increasingly so we approach the expiration.

Which leads to an appeal: a volunteer is needed to update the QuantLib 1.7 build for Windows. Jeroen tried, but ran into a snag and out of time. If you can help, please get in touch to Jeroen and myself. We suspect that the largest part of RQuantLib users relies on the prebuilt binaries from CRAN, and it would nice to have these updated to the current version of QuantLib.

The full changes are detailed below.

Courtesy of CRANberries, there is also a diffstat report for the this release. As always, more detailed information is on the RQuantLib page. Questions, comments etc should go to the rquantlib-devel mailing list off the R-Forge page. Issue tickets can be filed at the GitHub repo.