This post was written by Dirk Eddelbuettel and Christoph Sax and will be posted on both author's respective blogs.

The seasonal package by Christoph Sax brings a very featureful and expressive interface for working with seasonal data to the R environment. It uses the standard tool of the trade: X-13ARIMA-SEATS. This powerful program is provided by the statisticians of the US Census Bureau based on their earlier work (named X-11 and X-12-ARIMA) as well as the TRAMO/SEATS program by the Bank of Spain. X-13ARIMA-SEATS is probably the best known tool for de-seasonalization of timeseries, and used by statistical offices around the world.

Sadly, it also has a steep learning curve. One interacts with a basic command-line tool which users have to download, install and properly reference (by environment variables or related means). Each model specification has to be prepared in a special 'spec' file that uses its own, cumbersome syntax.

So we decided to do something about this. A pair of GitHub repositories provide both the underlying binary in a per-operating system form (see x13prebuilt) as well as a ready-to- use R package (see x13binary) which uses the former to provide binaries for R. And the latter is now on CRAN as package x13binary ready to be used on Windows, OS-X or Linux. And the seasonal package (in version 1.2.0 -- now on CRAN -- or later) automatically makes use of it. Installing seasaonal and x13binary in R is now as easy as:

which opens the door for effortless deployment of powerful deasonalization. By default, the principal function of the package employs a number of automated techniques that work well in most circumstances. For example, the following code produces a seasonal adjustment of the latest data of US retail sales (by the Census Bureau) downloaded from Quandl:

This tests for log-transformation, performs an automated ARIMA model search, applies outlier detection, tests and adjusts for trading day and easter effects, and invokes the SEATS method to perform seasonal adjustment. And this is how the adjusted series looks like: 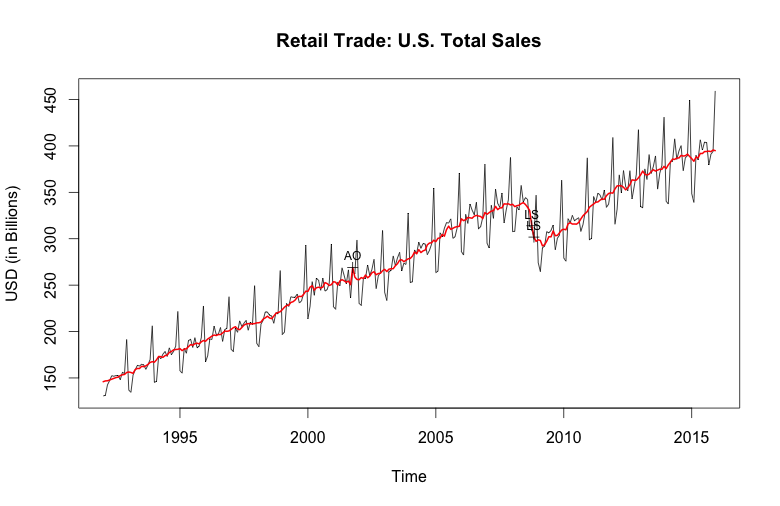 Of course, you can access all available options of X-13ARIMA-SEATS as well. Here is an example where we adjust the latest data for Chinese exports (as tallied by the US FED), taking into account the different effects of Chinese New Year before, during and after the holiday:

which generates the following chart demonstrating a recent flattening in export activity measured in USD. 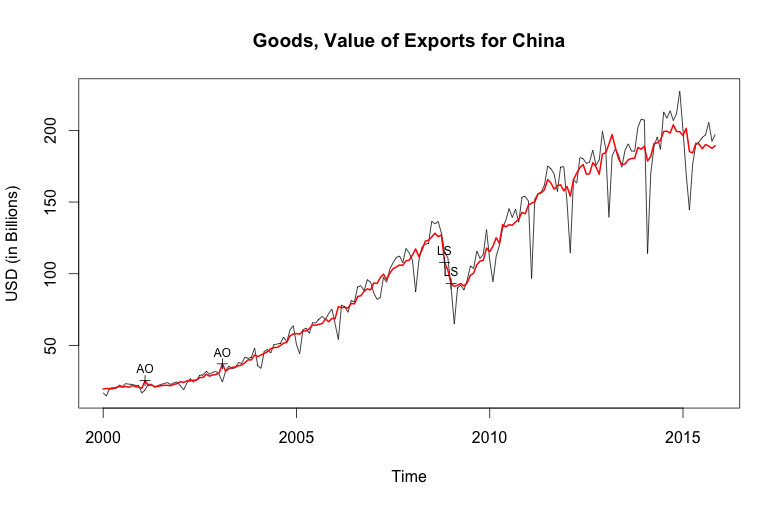 We hope this simple examples illustrates both how powerful a tool X-13ARIMA-SEATS is, but also just how easy it is to use X-13ARIMA-SEATS from R now that we provide the x13binary package automating its installation.