Hadley is a popular figure, and rightly so as he successfully introduced many newcomers to the wonders offered by R. His approach strikes some of us old greybeards as wrong---I particularly take exception with some of his writing which frequently portrays a particular approach as both the best and only one. Real programming, I think, is often a little more nuanced and aware of tradeoffs which need to be balanced. As a book on another language once popularized: "There is more than one way to do things." But let us leave this discussion for another time.

As the reach of the Hadleyverse keeps spreading, we sometimes find ourselves at the receiving end of a cost/benefit tradeoff. That is what this post is about, and it uses a very concrete case I encountered yesterday.

As blogged earlier, the RcppZiggurat package was updated. I had not touched it in a year, but Brian Ripley had sent a brief and detailed note concerning something flagged by the Solaris compiler (correctly suggesting I replace fabs() with abs() on integer types). (Allow me to stray from the main story line here for a second to stress just how insane a work load he is carrying, essentially for all of us. R and the R community are so just so indebted to him for all his work---which makes the usual social media banter about him so unfortunate. But that too shall be left for another time.) Upon making the simple fix, and submitting to GitHub the usual Travis CI was triggered. And here is what I saw:

All happy, all green. Previous build a year ago, most recent build yesterday, both passed. But hold on: test time went from 2:54 minutes to 7:47 minutes for an increase of almost five minutes! And I knew that I had not added any new dependencies, or altered any build options. What did happen was that among the dependencies of my package, one had decided to now also depend on ggplot2. Which leads to a chain of sixteen additional packages being loaded besides the four I depend upon---when it used to be just one. And that took five minutes as all those packages are installed from source, and some are big and take a long time to compile.

There is however and easy alternative, and for that we have to praise Michael Rutter who looks after a number of things for R on Ubuntu. Among these are the R builds for Ubuntu but also the rrutter PPA as well as the c2d4u PPA. If you have not heard this alphabet soup before, a PPA is a package repository for Ubuntu where anyone (who wants to sign up) can upload (properly setup) source files which are then turned into Ubuntu binaries. With full dependency resolution and all other goodies we have come to expect from the Debian / Ubuntu universe. And Michael uses this facility with great skill and calm to provide us all with Ubuntu binaries for R itself (rebuilding what yours truly uploads into Debian), as well as a number of key packages available via the CRAN mirrors. Less know however is this "c2d4u" which stands for CRAN to Debian for Ubuntu. And this builds on something Charles Blundell once built under my mentorship in a Google Summer of Code. And Michael does a tremdous job covering well over a thousand CRAN source packages---and providing binaries for all. Which we can use for Travis!

which implies source builds of the four listed packages and all their dependencies with the following line implying binary installations of already built packages:

In this particular case I also needed to build a binary package of my RcppGSL package as this one is not (yet) handled by Michael. I happen to have (re-)discovered the beauty of PPAs for Travis earlier this year and revitalized an older and largely dormant launchpad account I had for this PPA of mine. How to build a simple .deb package will also have to left for a future post to keep this more concise.

This can be used with the existing r-travis setup---but one needs to use the older, initial variant in order to have the ability to install .deb packages. So in the .travis.yml of RcppZiggurat I just use

to add my own PPA and all is good. If you do not have a PPA, or do not want to create your own packages you can still benefit from the PPAs by Michael and "mix and match" by installing from binary what is available, and from source what is not.

Here we were able to use an all-binary approach, so let's see the resulting performance:

So to conclude, while the every expanding universe of R packages is fantastic for us as users, it can be seen to be placing a burden on us as developers when installing and testing. Fortunately, the packaging infrastructure built on top of Debian / Ubuntu packages can help and dramatically reduce build (and hence test) times. Learning about PPAs can be a helpful complement to learning about Travis and continued integration. So maybe now I need a new reason to blame Hadley? Well, there is always snake case ...

Follow-up: The post got some pretty immediate feedback shortly after I posted it. Craig Citro pointed out (quite correctly) that I could use r_binary_install which would also install the Ubuntu binaries based on their R packages names. Having built R/CRAN packages for Debian for so long, I am simply more used to the r-cran-* notations, and I think I was also the one contributing install_aptget to r-travis ... Yihui Xie spoke up for the "new" Travis approach deploying containers, caching of packages and explicit whitelists. It was in that very (GH-based) discussion that I started to really lose faith in the new Travis approach as they want use to whitelist each and every package. With 6900 and counting at CRAN I fear this simply does not scale. But different approaches are certainly welcome. I posted my 1:03 to 1:15 minutes result. If the "New School" can do it faster, I'd be all ears. 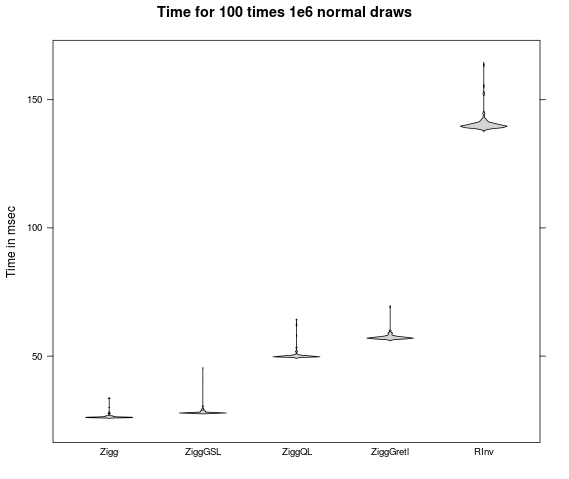 After a slight hiatus since the last release in early 2014, we are delighted to announce a new release of RcppZiggurat which is now on the CRAN network for R.

The RcppZiggurat package updates the code for the Ziggurat generator which provides very fast draws from a Normal distribution.

The package provides a simple C++ wrapper class for the generator improving on the very basic macros, and permits comparison among several existing Ziggurat implementations. This can be seen in the figure where Ziggurat from this package dominates accessing the implementations from the GSL, QuantLib and Gretl---all of which are still way faster than the default Normal generator in R (which is of course of higher code complexity).

This release contains a few internal cleanups relative to the last release. It was triggered by a very helpful email from Brian Ripley who notices compiler warnings on the Solaris platform due to my incorrect use of on integer variables.

Courtesy of CRANberries, there is also a diffstat report for the most recent release. More information is on the RcppZiggurat page.