A new release 0.4.4 of RProtoBuf is now on CRAN, and corresponds to the source archive for the Journal of Statistical Software paper about RProtoBuf as JSS vol71 issue 02. The paper is also included as a pre-print in the updated package.

RProtoBuf provides R bindings for the Google Protocol Buffers ("Protobuf") data encoding library used and released by Google, and deployed as a language and operating-system agnostic protocol by numerous projects.

This release brings small cleanups as well as build-system updates for the updated R 3.3.0 infrastructure based on g++ 4.9.*.

CRANberries also provides a diff to the previous release. The RProtoBuf page has an older package vignette, a 'quick' overview vignette, a unit test summary vignette, and the pre-print for the JSS paper. Questions, comments etc should go to the GitHub issue tracker off the GitHub repo. 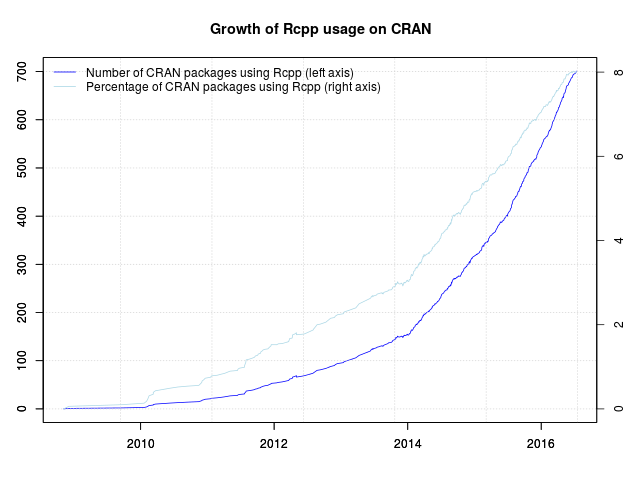 Earlier this morning, Rcpp reached another milestone: 701 packages on CRAN now depend on it (as measured by Depends, Imports and LinkingTo declarations). The graph is on the left depicts the growth of Rcpp usage over time.

Rcpp cleared 300 packages in November 2014. It passed 400 packages in June of last year (when I only tweeted about it), 500 packages in late October and 600 packages exactly four months ago in March. The chart extends to the very beginning via manually compiled data from CRANberries and checked with crandb. Then next part uses manually saved entries, and the final and largest part of the data set was generated semi-automatically via a short script appending updates to a small file-based backend. A list of packages using Rcpp is kept on this page.

Also displayed in the graph is the relative proportion of CRAN packages using Rcpp. The four per-cent hurdle was cleared just before useR! 2014 where I showed a similar graph (as two distinct graphs) in my invited talk. We passed five percent in December of 2014, six percent last July, seven percent just before Christmas and now criss-crosses 8 eight percent, or a little less than one in twelve R packages.

700 user packages is a really large and humbling number. This places quite some responsibility on us in the Rcpp team as we continue to try our best try to keep Rcpp as performant and reliable as it has been.