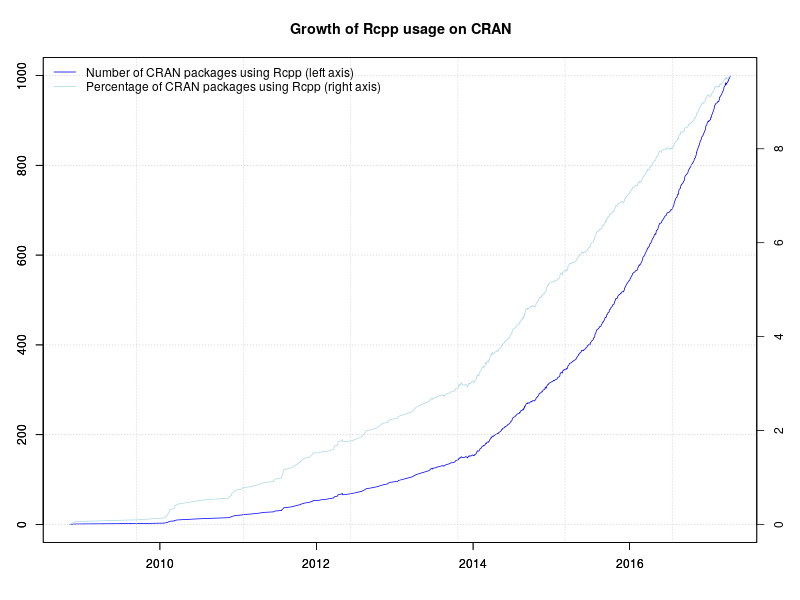 Moments ago Rcpp passed a big milestone as there are now 1000 packages on CRAN depending on it (as measured by Depends, Imports and LinkingTo, but excluding Suggests). The graph is on the left depicts the growth of Rcpp usage over time.

One easy way to compute such reverse dependency counts is the tools::dependsOnPkgs() function that was just mentioned in yesterday's R^4 blog post. Another way is to use the reverse_dependencies_with_maintainers() function from this helper scripts file on CRAN. Lastly, devtools has a function revdep() but it has the wrong default parameters as it includes Suggests: which you'd have to override to get the count I use here (it currently gets 1012 in this wider measure).

Rcpp cleared 300 packages in November 2014. It passed 400 packages in June 2015 (when I only tweeted about it), 500 packages in late October 2015, 600 packages last March, 700 packages last July, 800 packages last October and 900 packages early January. The chart extends to the very beginning via manually compiled data from CRANberries and checked with crandb. The next part uses manually saved entries. The core (and by far largest) part of the data set was generated semi-automatically via a short script appending updates to a small file-based backend. A list of packages using Rcpp is kept on this page.

Also displayed in the graph is the relative proportion of CRAN packages using Rcpp. The four per-cent hurdle was cleared just before useR! 2014 where I showed a similar graph (as two distinct graphs) in my invited talk. We passed five percent in December of 2014, six percent July of 2015, seven percent just before Christmas 2015, eight percent last summer, and nine percent mid-December 2016. Ten percent is next; we may get there during the summer.

1000 user packages is a really large number. This puts a whole lot of responsibility on us in the Rcpp team as we continue to keep Rcpp as performant and reliable as it has been.