A Knoppix / Debian variant tailored to numerical and quantitative analysis.

Support for openMosix has been backported from clusterKnoppix v3.6 with the reliable openMosix-enabled 2.4.27 kernel. The packages list ordered by size and the detailed packages list provide details about the included programs, see the changelog for a detailed summary of all the changes. Download informations are provided below. Also see the Quantian blog page, the changelog, the todo and bugs pages, and well as the set of short howtos for detailed information.

Quantian is a remastering of Knoppix, the self-configuring and directly bootable cdrom/dvd that turns any pc or laptop (provided it can boot from cdrom/dvd) into a full-featured Linux workstation. Quantian also incorporates clusterKnoppix and adds support for openMosix, including remote booting of light clients in an openMosix terminal server context. Earlier releases are still available; see below for URLs for downloads as well as ordering information.

Brief introductory information is available in a recent paper published in The Political Methodologist, slides from presentations at UseR! 2006 (June 2006), DSC 2005 (August 2005), Usenix 2004 (July 2004), and in the earlier (revised) paper about Quantian that has appeared in the DSC 2003 Proceedings.

Quantian differs from Knoppix by adding a large number of programs of interest to applied or theoretical workers in quantitative or data-driven fields. The added quantitative, numerical or scientific programs comprise

At the same time, all the distinguishing features that set Knoppix apart are retained in Quantian:

Last but not least, and thanks to clusterKnoppix, quantian allows to build openMosix clusters in a matter of minutes -- and to immediately use them thanks to the 5 gb of added scientific software.

You can click on any of the images to see a full-size chart. The first screenshot shows version 0.3 with openMosix running on a cluster with two computers, an R session (run from with XEmacs using the ESS mode) with lattice graphics, the QuantLib demo 'BermudanSwaption' as well as TeXmacs -- and the Knoppix 3.2 heritage is clearly visible on the background. 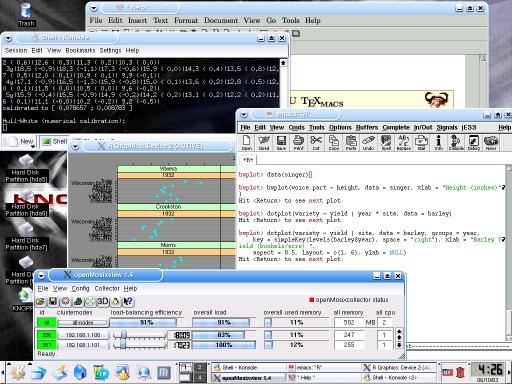 The second screenshot shows Quantian version 0.4.9.3 with an openmosixview display of a three-node / four-cpu cluster as well as the kile LaTeX frontend -- and the Knoppix 3.3 background image. 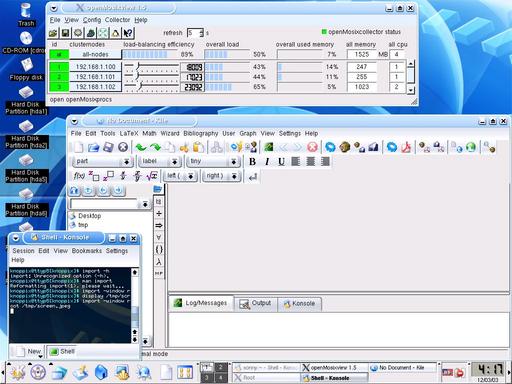 The third screenshot shows Quantian 0.5.9.2 with its new custom background which was contributed by Ed Pegg, Jr. Also shown are an R session running in an XEmacs buffer controlled by ESS. The R session displays a demo from Rmetrisc which displays the sensitivities of financial options to various parameters--the so-called 'greeks'--in a 3x2 display. Also shown is openMosixview. 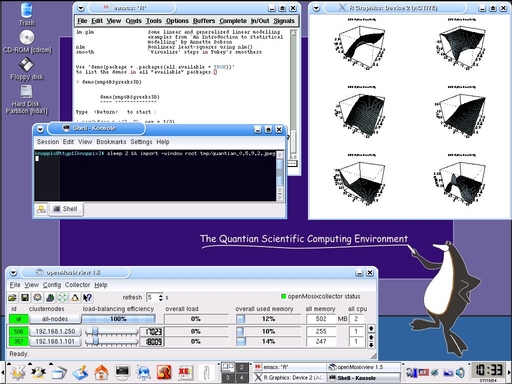 Note that the increased filesize may create problems with web-caching software that can only handle files of up to 2 gb in size. It may be safer to use rsync or bittorrent instead of http webdownloads.

Rsync access is available at the Fred Hutchinson archive.

would retrieve a directory listing, and for example would (verbosely) retrieve the 0.6.9.x-compatible boot image to the current directory.

Bittorrent A new torrent is available thanks to the Linux Mirror Project, as well as at EpiGenomics (in Germany). U of Washington used to have both a bittorrent seeder and mirror with a nice graphical summary of usage, but that machine is currently, and for the foreseeable near-term future, unavailable.

Quantian dvds and cdrom are available pre-made from the following third-party resellers: I should note that I am not compensated by any of these vendors.

Please send comments, suggestions to the quantian-general list. If your browser and mailer are configured correctly, then this link will open a new post.