A little mini-meme got started on August 1 when Ben Bolker posted the following code to the r-devel list (and here I substituted the more standard '<-' assignment operator for the less standard though-now permitted '='): In five lines (that could be shortened to three at the expense of some readibility), the SVN log for R is downloaded directly from the website, the revision authors are extraced and then tabulated by submitter. The relative percentage of Brian Ripley is found to be a staggering 74.8% -- or about three times as much as the other fifteen committers combined. Smokes.

[ Oh, and for those who don't know him, he's also got a day job which presumably entails looking after his graduate students at Oxford. Who knows, he may even teach. Kidding aside, he's actually one of the nicest persons you'll ever meet in real life. ]

Now yesterday, Simon Jackman who had at first simply repeated Ben's analysis on his own blog followed up with a nice analysis (albeit typeset in a way that rendered the code inoperational, which has now been fixes) that creates both a histogram and a dotplot of commits per hour of the day. Omitting Ben's code which Simon reuses, we have the following for histogram and dotchart:

This extracts the commit times, subsets to the ones by Prof. Ripley, extracts the timezones component (as strptime seemingly doesn't do that which is a pain), extracts the tz-less time via strptime into a variable 'z' for which the histogram is drawn. He then corrects the times by the tz offset expressed in seconds, formats is as hour of the day and turns it into a 'factor' (an R data type for qualitative variables which may be ordered as is the case here) and draws a dotplot. This results in the following chart: 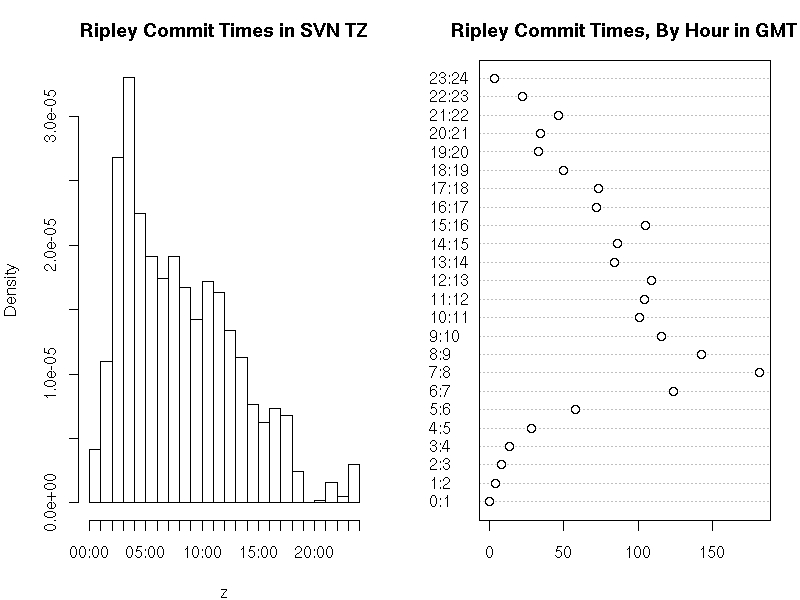 Now, nobody has looked at the time series. So we correct this and add the following:

This extracts both date and time, creates a proper R time object (a so-called POSIXct type) from it, fills a zoo ('the' magic class for time series) object with it, uses zoo to aggregate commits per day and plots those in a barchart-alike (I know, I know, ...) plot to which we add the two releases as well as a rolling and centered three-week median (as a real quick hack rather than a proper smooth). 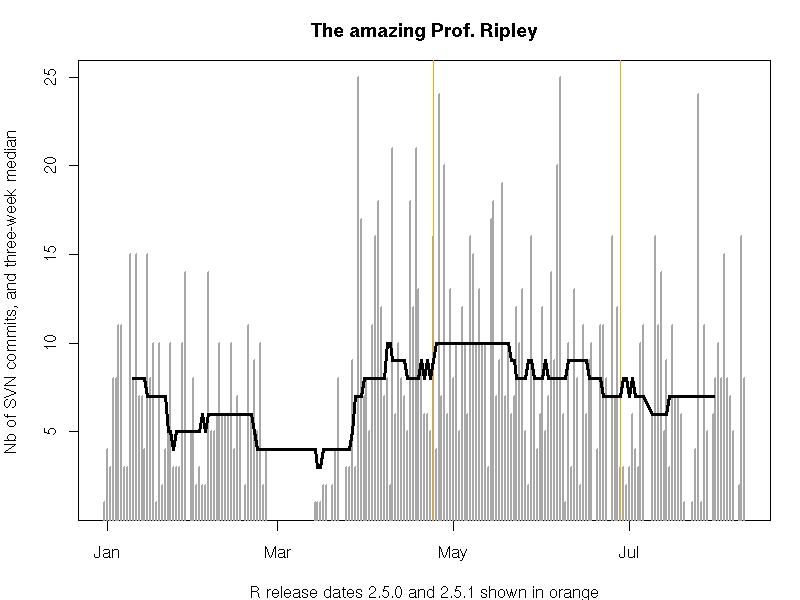 This shows that Prof Ripley averaged about ten commits a day before and after the release of R 2.5.0, and that he has slowed down ever so slightly since then to end up at around a mere seven commits a day. Every day. For the seven-plus months we looked at.

So, anyone for analysing his r-help posting frequencies ?

One talk was joint work with Steffen Moeller (who had also presented our work in Italy in June, and I added that presentation too), David Vernazobres and Albrecht Gebhard and concerns automated building of around two thousand (!!) new Debian source packages for all CRAN and BioConductor packages for GNU R. I plan to send something to debian-devel on that in a day or two as well because the time is right for some feedback on this.

The other talk was on about RDieHarder. This is joint work with Robert G. Brown and uses his DieHarder library for random number testing (that I've added to Debian a few months back). It allows R to both runs these tests, and to further analyse and visualize the test results. I finally uploaded RDieHarder to CRAN a few days ago -- in fact, my CRANberries rss feed of new CRAN packages had it show up the morning of the presentation. And now that I've added a webpage about RDieHarder I can finally say it's been released.