Rcpp now used by 2000 CRAN packages–and one in eight! 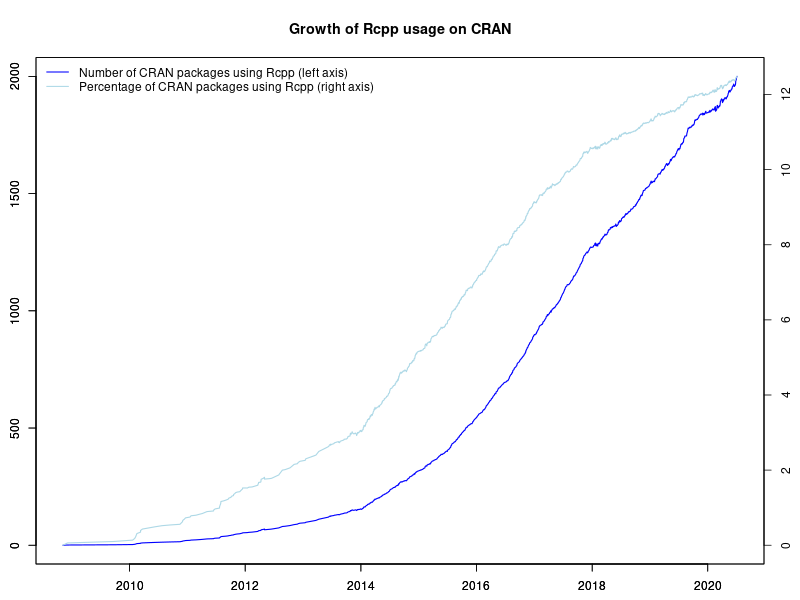 As of yesterday, Rcpp stands at exactly 2000 reverse-dependencies on CRAN. The graph on the left depicts the growth of Rcpp usage (as measured by Depends, Imports and LinkingTo, but excluding Suggests) over time.

Also displayed in the graph is the relative proportion of CRAN packages using Rcpp. The four per-cent hurdle was cleared just before useR! 2014 where I showed a similar graph (as two distinct graphs) in my invited talk. We passed five percent in December of 2014, six percent July of 2015, seven percent just before Christmas 2015, eight percent in the summer of 2016, nine percent mid-December 2016, cracked ten percent in the summer of 2017 and eleven percent in 2018. We now passed 12.5 percent—so one in every eight CRAN packages dependens on Rcpp. Stunning. There is more detail in the chart: how CRAN seems to be pushing back more and removing more aggressively (which my CRANberries tracks but not in as much detail as it could), how the growth of Rcpp seems to be slowing somewhat outright and even more so as a proportion of CRAN – as one would expect a growth curve to.

To mark the occassion, I sent out two tweets yesterday: first a shorter one with “just the numbers”, followed by a second one also containing the few calculation steps. The screenshot from the second one is below.

2000 user packages is pretty mind-boggling. We can use the progression of CRAN itself compiled by Henrik in a series of posts and emails to the main development mailing list. Not that long ago CRAN itself did have only 1000 packages, then 5000, 10000, and here we are at just over 16000 with Rcpp at 12.5% and still growing (though maybe more slowly). Amazeballs.